"Re, also spelled Ra or Pra, in ancient Egyptian religion, god of the sun and creator god. He was believed to travel across the sky in his solar bark and, during the night, to make his passage in another bark through the underworld, where, in order to be born again for the new day, he had to vanquish the evil serpent Apopis (Apepi). As one of the creator gods, he rose from the ocean of chaos on the primeval hill, creating himself and then in turn engendering eight other gods."
—Encyclopedia Britannica

"Thoth, (Greek), Egyptian Djhuty, in Egyptian religion, a god of the moon, of reckoning, of learning, and of writing. He was held to be the inventor of writing, the creator of languages, the scribe, interpreter, and adviser of the gods, and the representative of the sun god, Re. His responsibility for writing was shared with the goddess Seshat. The cult of Thoth was centred in the town of Khmunu (Hermopolis) in Upper Egypt."
—Encyclopedia Britannica

"Anubis, also called Anpu, ancient Egyptian god of the dead, represented by a jackal or the figure of a man with the head of a jackal. In the Early Dynastic period and the Old Kingdom, he enjoyed a preeminent (though not exclusive) position as lord of the dead, but he was later overshadowed by Osiris. His role is reflected in such epithets as 'He Who Is upon His Mountain' (i.e., the necropolis), 'Lord of the Sacred Land,' 'Foremost of the Westerners,' and 'He Who Is in the Place of Embalming.'"
—Encyclopedia Britannica

"Tutankhamun, byname King Tut, (flourished 14th century bce), king of ancient Egypt (reigned 1333-23 bce), known chiefly for his intact tomb, KV 62 (tomb 62), discovered in the Valley of the Kings in 1922. During his reign, powerful advisers restored the traditional Egyptian religion and art, both of which had been set aside by his predecessor Akhenaton, who had led the 'Amarna revolution.'"
—Encyclopedia Britannica

"Cleopatra, (born 70/69 bce-died August 30 bce, Alexandria), Egyptian queen, famous in history and drama as the lover of Julius Caesar and later as the wife of Mark Antony. She became queen on the death of her father, Ptolemy XII, in 51 bce and ruled successively with her two brothers Ptolemy XIII and Ptolemy XIV and her son Ptolemy XV Caesar. Cleopatra actively influenced Roman politics at a crucial period, and she came to represent...the prototype of the romantic femme fatale."
—Encyclopedia Britannica

"Mummy, body embalmed, naturally preserved, or treated for burial with preservatives after the manner of the ancient Egyptians. The process varied from age to age in Egypt, but it always involved removing the internal organs (though in a late period they were replaced after treatment), treating the body with resin, and wrapping it in linen bandages. "
—Encyclopedia Britannica

"Ancient Egyptian women's role in society was perhaps more important than a women's role in any other ancient civilisation. For women of lower classes, the most common profession was peasantry to which majority of the population was associated. It was also common for women to manage farms or businesses in the absence of any male member of the family. Egyptian Women from well-to-do families also worked as perfume-makers and were sometimes employed in courts or temples."
—Legends and Chronicles 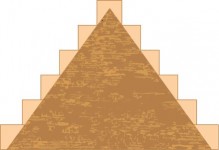 "Pyramids of Giza, three 4th-dynasty (c. 2575-c. 2465 bce) pyramids erected on a rocky plateau on the west bank of the Nile River near Giza in northern Egypt. In ancient times they were included among the Seven Wonders of the World. The ancient ruins of the Memphis area, including the Pyramids of Giza...were collectively designated a UNESCO World Heritage site in 1979."
—Encyclopedia Britannica 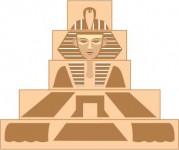 "Great Sphinx of Giza, colossal limestone statue of a recumbent sphinx located in Giza, Egypt, that likely dates from the reign of King Khafre (c. 2575-c. 2465 bce) and depicts his face. It is one of Egypt's most famous landmarks and is arguably the best-known example of sphinx art."
—Encyclopedia Britannica

"Sarcophagus, stone coffin. The earliest stone coffins in use among the Egyptians of the 3rd dynasty (c. 2650-2575 bce) were designed to represent palaces of mud-brick architecture, with an ornamental arrangement of false doors and windows. In the case of royalty, some were made of solid gold (Tutankhamen) or silver (Psussenes I). In the 18th-20th dynasties (c. 1539-1075 bce), the upper classes enclosed inner coffins of wood or metal in stone outer sarcophagi."
—Encyclopedia Britannica

"Symbols played a very important role in ancient Egypt. Ancient Egyptian religion has many gods and symbols and among them there some that were only associated with the king or queen. Many of them represented gods.
Eye - "In the Pyramid Texts two 'evil eyes' are mentioned, which seal the door-catch. It was believed that the sun and the moon were the eyes of the god Horus of whom it was written that 'when he opens his eyes he fills the universe with light and when he shuts them darkness appears'.
Crook and Flail - "As the symbols of divine authority and kingship, the Crook and Flail were carried by Egyptian Pharaohs in important state ceremonies like coronations of the pharaohs.
Falcon - "The falcon was the king of the air and the sacred animal of Horus, the king of the gods and lord of the sky. Horus was believed to appear in the form of a "falcon-headed god." He could see all, because one eye was the sun and the other was the moon."
—Ancient Pages