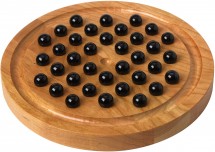 There are two versions of marble solitaire that can be played on this board.

Starts with 32 marbles filling all positions except the center and the four shown with an X on the diagram. The "X" positions are not to be used during play. Play by jumping marbles, one over another in any direction, except diagonally. Remove the one jumped from play. The object of the game is to continue play with the final remaining marble being in the center spot.

The more challenging variation, with a couple options for play. In each case, the game uses all 37 holes.

First, by allowing diagonal jumps the game may be started and ended from the center hole as in the English version above.

Second, the game may be played (w/o diagonal jumps) by selecting any hole as a starting and ending point. The trick is to reintroduce a removed marble to the starting hole, once during play, when it becomes subsequently vacant.