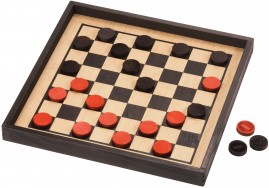 Pieces Each player starts with 12 pieces of one color, red or black. There are two classes of pieces: "men" and "kings". Kings are differentiated as consisting of two normal pieces of the same color, stacked one on top of the other.

Starting Position Each player starts with their pieces on the dark spaces of the three rows closest to his own side. The row closest to each player is called the "crownhead" or "kings row". The player with the darker colored pieces moves first.

There are two ways to move a piece:

An uncrowned piece may only jump diagonally forwards, kings may also jump diagonally backwards. A piece that is jumped is captured and removed from the board. Multiple-jump moves are possible if when the jumping piece lands, there is another immediate piece that can be jumped; even if the jump is in a different direction. Jumping is mandatory - whenever a player has the option to jump, he/she must jump. When multiple-option jumping moves are available, whether with the one piece in different directions or multiple pieces that can make various jumping moves, the player may choose which piece to jump with and which jumping option or sequence of jumps to make. The jumping sequence chosen does not necessarily have to be the one that would have resulted in the most captures; however, one must make all available captures in the chosen sequence. Any piece, whether it is a king or not, can jump a king.

If a player's piece moves into the kings row on the opposing player's side of the board, that piece is said to be "crowned" (or "kinged"), becoming a "king" and gaining the ability to move both forwards and backwards. If a player's piece jumps into the kings row, the current move terminates; having just been crowned, the piece cannot continue on by jumping back out (as in a multiple jump), until the next move. A piece is normally "crowned" by placing a second piece on top of it; for pieces with an engraving on one side the player may simply turn the piece over, further differentiating Kings from ordinary pieces.

HOW THE GAME ENDS