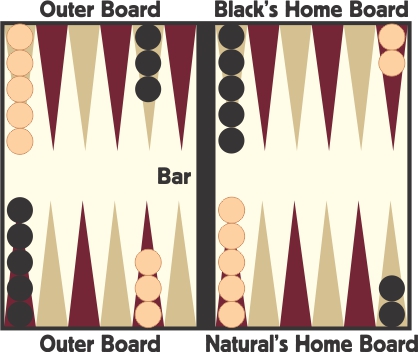 Both players have their own pair of dice and a dice cup used for shaking. A doubling cube, with the numerals 2, 4, 8, 16, 32, and 64 on its faces, is used to keep track of the current stake of the game. 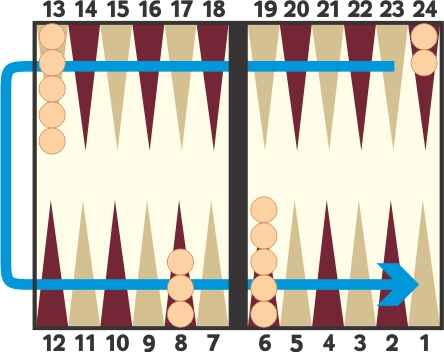 OBJECT OF THE GAME

The object of the game is move all your checkers into your own home board and then bear them off. The first player to bear off all of their checkers wins the game.

To start the game, each player throws a single die. This determines both the player to go first and the numbers to be played. If equal numbers come up, then both players roll again until they roll different numbers. The player throwing the higher number now moves his checkers according to the numbers showing on both dice. After the first roll, the players throw two dice and alternate turns.

The roll of the dice indicates how many points, or pips, the player is to move his checkers. The checkers are always moved forward, to a lower-numbered point. The following rules apply:

1) A checker may be moved only to an open point, one that is not occupied by two or more opposing checkers. 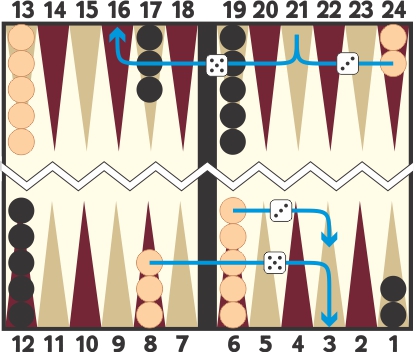 3) A player who rolls doubles plays the numbers shown on the dice twice. A roll of 6 and 6 means that the player has four sixes to use, and he may move any combination of checkers he feels appropriate to complete this requirement. 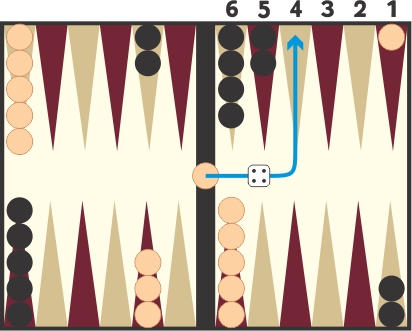 A point occupied by a single checker of either color is called a blot. If an opposing checker lands on a blot, the blot is hit and placed on the bar.

Any time a player has one or more checkers on the bar, his first obligation is to enter those checker(s) into the opposing home board. A checker is entered by moving it to an open point corresponding to one of the numbers on the rolled dice.

For example, if a player rolls 4 and 6, he may enter a checker onto either the opponent's four point or six point, so long as the prospective point is not occupied by two or more of the opponent's checkers.

If neither of the points is open, the player loses his turn. If a player is able to enter some but not all of his checkers, he must enter as many as he can and then forfeit the remainder of his turn.

After the last of a player's checkers has been entered, any unused numbers on the dice must be played, by moving either the checker that was entered or a different checker. player must play as many numbers as he can.

Once a player has moved all of his fifteen checkers into his home board, he may commence bearing off. A player bears off a checker by rolling a number that corresponds to the point on which the checker resides, and then removing that checker from the board. Thus, rolling a 6 permits the player to remove a checker from the six point.

If there is no checker on the point indicated by the roll, the player must make a legal move using a checker on a higher-numbered point. If there are no checkers on higher-numbered points, the player is permitted (and required) to remove a checker from the highest point on which one of his checkers resides. A player is under no obligation to bear off if he can make an otherwise legal move.

Backgammon is played for an agreed stake per point. Each game starts at one point. During the course of the game, a player who feels he has a sufficient advantage may propose doubling the stakes. He may do this only at the start of his own turn and before he has rolled the dice.

A player who is offered a double may refuse, in which case he concedes the game and pays one point. Otherwise, he must accept the double and play on for the new higher stakes. A player who accepts a double becomes the owner of the cube and only he may make the next double.

Subsequent doubles in the same game are called redoubles. If a player refuses a redouble, he must pay the number of points that were at stake prior to the redouble. Otherwise, he becomes the new owner of the cube and the game continues at twice the previous stakes. There is no limit to the number of redoubles in a game.

The following optional rules are in widespread use:

Automatic Doubles If identical numbers are thrown on the first roll, the stakes are doubled. The doubling cube is turned to 2 and remains in the middle. Players usually agree to limit the number of automatic doubles to one per game.

Beavers When a player is doubled, he may immediately redouble (beaver) while retaining possession of the cube. The original doubler has the option of accepting or refusing as with a normal double.

The Jacoby Rule Gammons and backgammons count only as a single game if neither player has offered a double during the course of the game. This rule speeds up play by eliminating situations where a player avoids doubling so he can play on for a gammon.

The dice must be rolled together and land flat on the surface of the right-hand section of the board. The player must reroll both dice if a die lands outside the right-hand board, or lands on a checker, or does not land flat.

A turn is completed when the player picks up his dice. If the play is incomplete or otherwise illegal, the opponent has the option of accepting the play as made or of requiring the player to make a legal play. A play is deemed to have been accepted as made when the opponent rolls his dice or offers a double to start his own turn.

If a player rolls before his opponent has completed his turn by picking up the dice, the player's roll is voided. This rule is generally waived any time a play is forced or when there is no further contact between the opposing forces.